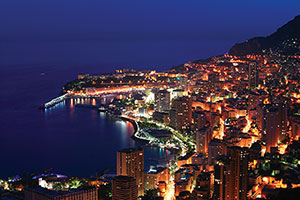 Playground of high-rollers, Monaco lights up with a King, outrageous nightclubs, and enough high-stakes gambling to win (or lose) a fortune.

Few specks of land yield as much wealth and power as Monaco, the fabled principality wedged between the Southern Alps and the Mediterranean Sea.

Proving that size doesn't always matter, Monaco occupies less than a square mile of land (Manhattan covers 23 square miles), but has managed to pack every inch of hillside with the stuff dreams are made of. A favorite of European royalty, Arab sheikhs, and opulently wealthy Americans who dock their mobile playground yachts in the marina between Cote d'Azur tours, Monaco has seen fortunes won and lost in its casinos.

Once the tourists have packed up near the end of summer, serious players converge on Monaco, enjoying all it has to offer: high-stakes gaming, luxurious hotels, gala events, and some of the world's finest dining.

"The Gods were very generous to Cote d'Azur. There is something unexplainably perfect in Monaco during autumn," explains Maguy Maccario-Doyle, the Consulate General of Monaco to the United States. Monaco has unmatched appeal for high-rolling gamblers and other connoisseurs of the good life and there hasn't been a more perfect time to go since Grace Kelly's time. Ushering in this historic location, new four-star hotels, Michelin-ranked restaurants, and the annual Monte Carlo Millions--the world's most exclusive poker tournament--add an electric vitality to the elegant principality.

Unless you plan on arriving by yacht, the most distinguished way to enter Monaco is by helicopter from Nice. Not only is the view from the chopper gorgeous, but it alerts your competition that you have arrived, both figuratively and literally. As you approach the principality, shades of deep aquamarine blue explode from the Mediterranean to greet you from behind every hill and through the many Belle Epoque buildings.

In the see-and-be-seen square of Place du Casino, Maseratis, Ferraris, and Alfa Romeos line the streets, filling the vacuum left behind by the since-departed summer tourist traffic. Upon entry, you'll have to choose between some of the world's classiest hotels. Whether it's the ultra-chic Hotel Hermitage, known for its discreet clientele, the classic Hotel de Paris, the rendezvous spot known for its cache among celebrities, or the cozy elegance of The Hotel Metropole Monte-Carlo, you will find a fitting spot to drop your bags and settle down. 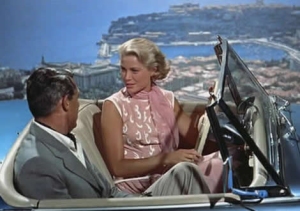 Monte-Carlo Bay Hotel and Resort opened recently with a beachside location, in-house casino, exclusive nightclub, and spa service that might convince you never to leave the grounds. But for any serious gambler, a visit to the nearby Casino de Monte-Carlo is a must. Distinguished by the legendary players who have won upwards of $12 million in one sitting, the casino sees high rollers from around the world converge on its tables. Local insiders claim French roulette offers the best odds for players; no wonder it's the most popular game in town.

The legendary casino has attracted such dignitaries as Winston Churchill, President Bill Clinton, and Prince Charles. Most recently, Tiger Woods, Ben Affleck, Cindy Crawford, Elle McPherson, Brad Pitt, Bruce Willis, and George Clooney have all stopped by hoping for a chance rendezvous with Lady Luck. Looking for a less formal and rarified casino experience? Check out The Sun at the Fairmont Monte-Carlo, a Las Vegas-style casino featuring poker, blackjack, roulette, and craps.

Finally warming to poker, Monaco featured the Monte Carlo Millions in 2004 and 2005, an exclusive tournament hosted by Matt Savage, poker tournament organizer extraordinaire. In 2005 only 120 participants, mostly professionals and celebrities personally invited by Savage, competed for the guaranteed $1 million first prize won by Phil Ivey. With a buy-in of $25,000, the tournament was not for the gaming dilettante.

But even a high roller can't live on casino munchies and single malt scotch alone. Fortunately, Monaco boasts haute cuisine to rival even Paris' culinary excellence. Le Grill in the Hotel de Paris is a favorite for its classic French cuisine and unique rooftop ambiance; the view of the Monaco skyline is breathtaking.

Be sure to try one of their award-winning soufflés, especially the fresh hazelnut and cheese special. Also in the central Hotel de Paris is the legendary Three-Star Michelin rated Le Louis XV. Chef Alain Ducasse offers the pinnacle in classic French cuisine and access to the hotel's prestigious wine cellars, which house 400,000 bottles with 40 rare vintages.

If luck is on your side, you may be invited to dine inside the kitchen in a private room known only to a privileged few. Chef Joel Robuchon recently opened a restaurant in the Hotel Metropole Monte-Carlo. The aptly named Joel Robuchon Monte-Carlo is known for an eight-course tasting menu and roasting (a la Broche) technique. Try the truffles flown in from Alba this fall.

For the nightly after party, drop by Jimmy'z, the nightclub that has hosted the global glitterati's "it" couples from Richard Burton and Elizabeth Taylor to Jay-Z and Beyonce. Local lore has it that the term "jet set" was actually coined here one evening when a fleet of jets arrived, crowding the runways with patrons eager to celebrate the spot's anniversary.

The cognoscenti also down nightcaps at the Sass Cafe restaurant and piano bar. Come morning, the Gucci-loafered, Kelly-bagged crowd descends on the Café de Paris for cappuccinos and the best people-watching in all of Monaco.

After breakfast, work off your most recent action-packed all-nighters at Les Thermes Marins de Monte-Carlo spa, where Karl Lagerfeld and Mariah Carey recently indulged in their famed sea soaks. But anyone seeking a more active lifestyle heads over to the Monte Carlo Country Club for its 18 hole, 71 par world-class golf course. At 810 meters above sea level, it has some of the most beautiful panoramic views of the coastline.

If you're lucky, by nightfall you'll have enough intestinal fortitude (not to mention cash) to go at it all over again at the tables with the big boys. But if Lady Luck has abandoned you, console yourself with the knowledge that you aren't the first to get beat. After all, there's a reason why author Somerset Maugham described Monaco as "a sunny place for shady people."

If you are not now in Monaco, try an online Vegas Technology casino instead. You will find the same casino games that you get in Monaco in addition to many games not to be found in a brick and mortar casino.