The popularity of online baccarat 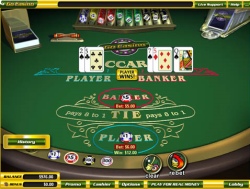 Online Baccarat has gained much popularity in recent years.

Baccarat was considered an exclusive game reserved for high society. Not surprisingly, as it was first a game played by European royalty and nobility from the end of the fifteenth century.

As Baccarat was traditionally played by wealthy high rollers, it has kept this intimidating aura. Not anymore, as online Baccarat makes Baccarat available to all bankrolls.

Everyone knows Baccarat, but not everyone knows the rules. This flamboyant game is often depicted as the glamorous casino games in famous movies such as Casino Royale or more recently in Rush Hour 3.

In Rush Hour Chris Tucker tries to seduce a beautiful woman playing high stakes Baccarat, but he thinks that he is playing blackjack, and this is just the beginning of big troubles for him.

This is the advantage of the Internet revolution that everyone can play Baccarat online.

Online Baccarat is like regular baccarat, without the pressure from the high rollers. At an online casino such as Rome Casino, you can wager anywhere between $1 and $500, or even less if you play with 'fun money'.

The player plays against the banker (the house). Both get two cards dealt from the "shoe", which contains eight decks of 52 cards without the jokers. The goal is to get as close as possible to nine. Each opponent adds the value of his cards, and if it is above 9, only keeps the single digit (example 13 = 3).

If after receiving their initial two cards the value of the cards in either the player's hand or the banker's is an eight or a nine (a "natural"), no more cards are dealt to either hand. If either hand is less or equal to five, a third card is drawn.

If the value of the banker's cards on the first two cards is seven or less, the player's hand is drawn in accordance with the Third Card rules.

If you are not playing baccarat in Monaco today, try an online casino instead.